This year I am beginning the school year in a different role; I will be away from direct classroom instruction, and working with colleagues around the Board as a Digital Literacy Support Teacher. That means I get to help teachers as they think about ways to incorporate technology into their practice, making positive changes that keep kids engaged and excited to learn.

I'm already feeling the change- no classroom set up; no class lists, duty schedules, etc. I do miss the first few days in late August when many of us roll back into the school and re-connect after the summer. The energy is motivating, and I'm often excited to get back to it with my colleagues. I'm now just thinking about last fall, and the single best thing I did as a teacher to set myself up for support from the parents.

I invited my class parents to all come at a specific time on Meet the Teacher night, for a 15 minute demo of the major technology tools I would be using in class with their kids. The "techno-slam" gave parents a chance to see Twitter, Google Apps, and Weebly in action, and to hear why I was using them.  We even had personal movies ready for our parents (see link to Mark Carbone's blog post) telling them how excited we were to be in Grade Four. 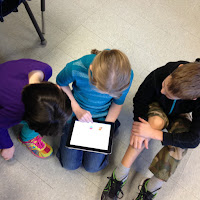 In addition to our Board's standard Media Release form, I also created my own specific form to allow students to be seen and heard on social media. I felt this was critical in order to make monthly news videos, rather than send home a monthly news letter.

At the end of my fifteen minute blurb, every family present had signed the permission form; a clear message to me that they were on board with my program!  Thanks to Mark Carbone, the evening was documented in video, so I could share it with others. Parents commented throughout the year that their students we so excited to be using tech tools; some commented that this was the most motivated their children had been so far as students. The products I received from kids, as well as the sharing we did through social media, made for experiences that would not have been possible without embracing the positive powers of technology as learners. Looking back on how much we created, learned, and shared, I can say The Slam was the smartest move I made to guarantee support and success.
Posted by Unknown at 7:25 AM